The IWB Strike is designed as an inside the waistband concealment holster that can be worn on the strongside (3 o’clock for RH shooters), or just behind the hip.

The Strike has an interesting history that started back 2003 when the Transportation Security Administration (TSA) developed the Federal Flight Deck Officer program, which allowed TSA approved and trained pilots to carry concealed firearms as an added layer of security. The program is administered by the Federal Air Marshal Service. When the program went online, the TSA started accepting bids for a CCW holster that met certain specific requirements. Don Hume submitted a prototype design which was later approved for use. The success of this design led Don Hume to make is available to the public in 2005 as the “IWB Strike”.

In order to save weight, the IWB Strike uses a specially kydex clip (instead of metal) that allows the shirt to be tucked in over the holster (hence the “tuckable” designation). The clip is designed to fit any belt up to 1.5” inches. It’s important to note that this holster will only work with a 1.5” or 1.25” belt.

The Strike rides at a fixed straight up and down cant, and features a reinforced thumb break for added weapon retention. The holster mouth is reinforced so it won’t collapse when the pistol is drawn, and allows for one handed re-holstering.

The IWB Strike is only available in black leather and is only made to fit a limited number of more popular semi-automatic pistol models. The Strike is not currently available to fit any revolver models. For any single action pistol based on the 1911 design, the thumb break on the Strike is designed to work with the pistol being carried in the Cocked & Locked (C&L) position with the hammer cocked. The thumb break on this model won’t work on a single action 1911 carried with the hammer down.

Here are some of the more common questions that we see regarding the IWB Strike:

#1 – I don’t see my gun listed in the drop-down menu, so does that mean I can’t order this holster?

As was mentioned above, Don Hume only offers the Strike to fit a limited number of pistol models. If you’re pistol isn’t listed in the drop-down menu, then Don Hume most likely doesn’t offer the Strike in a version to fir your pistol.

#2 – I have a Colt Commander and see something above about the thumb break only working in the “Cocked + Locked” position? I don’t understand what that means?

#3 - I like this holster but want it in brown instead of black?

Unfortunately, Don Hume only offers this model in black leather. 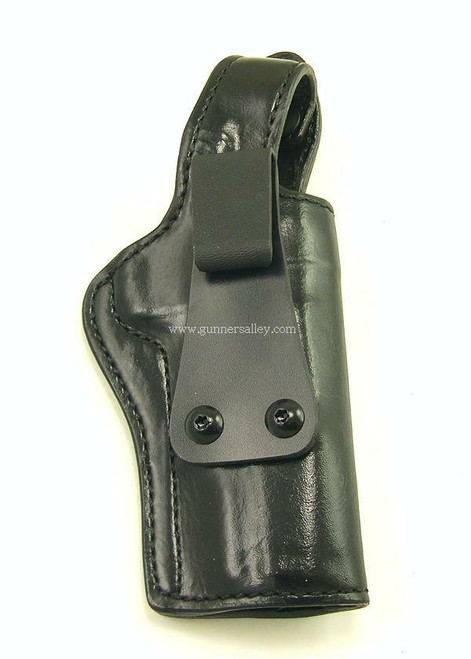