Inside the Waistband Holsters 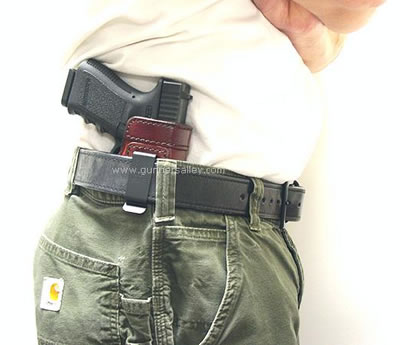 Most all IWB holsters require a gun belt in order to function properly and the holster attach to the belt through a number of methods including:

IWB holsters can also come with features that are made to increase their performance or comfort. Some of those features can include:

Variable Cant – The cant is a fancy name that describes the angle that the holster rides while in the waistband. Typically those cants are either straight up and down (also called a zero cant or no cant) or a forward cant (commonly set at 15 degrees and called a 15 degree forward cant)

Body or sweat shield – A bodyshield is a common term used to describe an area built into the holster that keeps the exposed parts of the handgun from coming into contact with the body.

IWB holsters are the most popular style of holster for concealed carry and are available in versions or models to fit just about any popular handgun model.