Beretta introduced the M9A1 handgun at the end of 2012 as an upgraded version of the standard Beretta M9 for the United States Marine Corps. 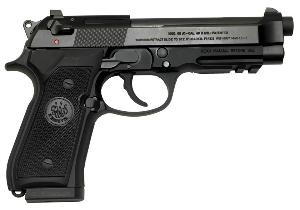 The M9A1 has several enhancements and improvements over the standard M9, including the following:

The M9A1 features identical operational controls to the standard M9 and the A1 variant functions identically to the M9 with the same DA/SA operation.

The M9A1 is available in two versions:

Holsters for the Beretta M9A1

There are a number of leather and kydex holster options on the market made specifically to fit the M9A1 pistol.

Outside the waistband holsters typically mount to the belt via one of two ways:

Both methods will work for the A1 pistol, although the belt slots offer more stability than belt snaps.

As mentioned previously, the overall size of the M9A1 makes it a bit big for IWB carry, but it can be done. If you are leaning towards an inside the waistband holster (commonly called an IWB holster), look for a model with two attachment points to help manage the overall weight and add stability.

Our IWB suggestions for the A1 are these models:

A paddle holster is another popular option for the M9A1 as the paddle offers an easier method for putting the holster on or taking it off. 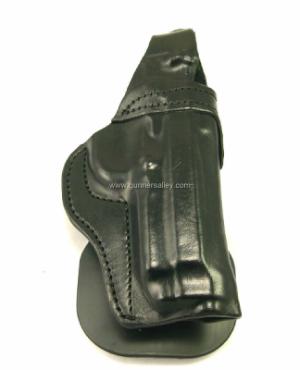 Since the M9A1 is equipped with an accessory rail, it’s a popular host for tactical pistol lights or weapon-mounted tactical lights.

Popular light choices for the M9A1 include brands such as Surefire, Streamlight, and Olight.

Most any of the holster models listed below are available in a version to fit the M9A1 with a light mounted.

Here are some commonly asked questions that we see about holsters for the Beretta 92A1:

Will the M9A1 fit in a holster made for the Beretta M9 or a standard Beretta 92?

Unfortunately, the M9A1 will NOT fit in a holster made for the M9 or standard Model 92 for two reasons:

Your best bet is to purchase a holster specifically made to fit the M9A1 handgun.

Do you have any Beretta m9a1 with rail holster options?

To clarify, all the Beretta M9A1 models are built with a rail in the frame. To date, Beretta has not offered an M9A1 model without a rail.

Any of the holster models listed below are available in a configuration to fit a Beretta M9A1.

Do you offer a Beretta M9A1 Compact holster?

Yes, we do, and those M9A1 Compact holsters can be seen here.