Introduced in 2008, the Taurus PT809 handgun was initially conceived as a modular style platform designed to allow caliber changes by switching the magazine and slide/barrel assembly. Taurus offered the 800 series of handguns in four versions: 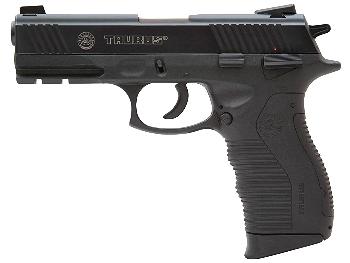 Scroll down or click this link to see all the Taurus PT809 holster models we carry.

The PT 809 was built on a polymer frame with an integrated light metal chassis system. This handgun is a SA/DA (single action/double action) platform featuring an external hammer, safety, and decocking lever.

Like several Taurus pistols, the 809 also offers Taurus’s “Double Strike” capability, which allows the hammer to automatically reset with a misfire so that the shooter can pull the trigger a second time for a follow-up strike on the misfired round.

Taurus opted to discontinue the PT-809 series in 2017 when they introduced the TH series of pistols.

From a size standpoint, the PT809 is considered a “full size” handgun, and it’s about the same size as a Glock 17.

Our top-selling inside the waistband Taurus 809 9mm holster options are these models:

Here are some frequently asked questions that we see regarding Taurus 809 holsters:

Since the frame and slides of both pistol models are the same sizes, the PT-845 will fit into a holster made for the more popular PT-809.

Do you have any PT-809 light bearing holsters? I have an Olight Pro mounted on my 809.

Any of the MTR Custom holsters shown below are available in a version to fit the 809 with most mainstream weapon lights (including Olight) mounted.

They can support most of the following light brands:

Any holster models displayed below are available to fit the Taurus PT-809 9mm pistol.