The success of the Ruger LCP in .380, coupled with the growing demand for an ultra-compact 9mm semi-automatic, led Ruger to introduce the Ruger LC9 in 2011. The LC9 (which stands for Lightweight Compact 9mm) is a single stack double action only pistol chambered in 9mm. Although based in part on the Ruger LCP design, the LC9 offers some features that not found on the LCP. Those features include a loaded chamber indicator and a magazine disconnect safety. In terms of specifications, the LC9 weighs 17.1 ounces (unloaded) and is exactly 6 inches in length. Compare those numbers to the smaller LCP with an unloaded weight of 9.5 ounces, and you can see that Ruger built the LC9 to be as light and compact as possible. 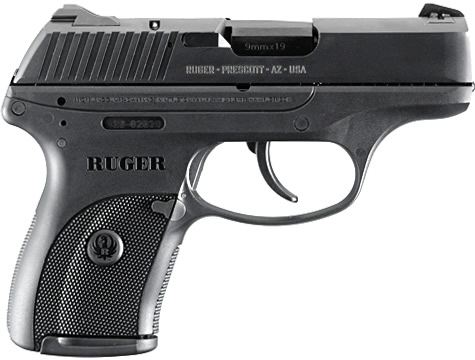 In terms of magazine capacity, the LC9 has the following options:

Like the LCP, the LC9 frame is a glass filled nylon polymer that is mated to an alloy steel slide and barrel. The success of the LC9 in 9mm prompted some ideas at Ruger to offer the LC9 in a .40 S&W caliber, but R&D testing indicated that the more powerful .40 round in the lightweight frame made control and shootability a potential concern. After being released at the SHOT show in 2011, the Ruger LC9 won a few different awards, including the 2011 Handgun of the Year as voted for by the Shooting Industry Academy of Excellence.

The LC9 has seen tremendous success in the market due to its compact size, features, and price point. In addition, the LC9 was one of the first budget oriented single stack 9mm pistols that targeted the CCW market so they grabbed significant market share early on. Ruger took the successes and failures associated with the LCP model and turned out a winner in the LC9. By incorporating the magazine disconnect safety and offering a magazine count under 10, the LC9 is available for purchase and sale in traditionally restrictive gun states like California and Massachusetts.

The LC9 was transitioned over to a striker fired version called the LC9S, and is offered in 13 models with various frame colors and accessories.:

Here are some common questions that we regarding Ruger LC9 and LC9S holster models:

I have a Ruger LC9S but most all the holsters I see on the market seem to be made for the standard Ruger LC9 model. Do you offer a Ruger LC9S holster option?

Is there a Ruger LC9 IWB holster that works better than others?

The small size, light weight, and slim profile make the LC9 and LC9S ideal choices to be carried in an IWB holster. In terms of IWB holster styles, the LC9 or LC9S works in in a standard riding IWB or a deeper cover type IWB that rides below the waistband. With an overall height of 4.5 inches, the LC9 can be carried IWB with either a straight up cant or a forward cant without any concealment issues. Our top IWB sellers are the ones listed under the next question about concelaed carry holsters for the LC9 or LC9S.

Can you recommend a good Ruger LC9S concealed holster?

Most any of the holster models listed below are good choices for concealed carry, but our most popular CCW holster models for the LC9 and LC9S are the:

What are your thoughts on carrying the LC9 or LC9S in a pocket holster?

While the LC9/LC9S are on the larger end of the scale for pocket carry, it can and will fit in a front pocket holster. Depending on one’s physical build and type of pants being worn, the LC9 can also be carried in a rear pocket holster. However, in tighter fitting pants like blue jeans which have a more shallow rear pocket, the grip of the pistol might protrude up out the pocket just a bit.

I have a Ruger LC9S with a Lasermax mounted. Do you offer a holster to fit that?

The LaserMax Centerfire laser is a popular LC9, LC9S, and LC9S Pro accessory and was offered as a factory option from Ruger. As this is an under barrel laser, any holster designed to fit the standard LC9/LC9S won’t fit an LC9/LC9S with a LaserMax atttached. We do carry a line of holster models from MTR Custom that are designed to fit the Ruger LC9, LC9S, or LC9S Pro equipped with a LaserMax CenterFire laser and those can be seen here. These models feature both IWB and OWB model holsters.

Do you offer any holsters to fit a Ruger LC9 or LC9S with a Crimson Trace laser mounted to it?

The Crimson Trace LaserGuard is another popular LC9/LC9S accessory which comes in a factory option from Ruger. This is another under barrel laser like the previously mentioned LaserMax Centerfire so a standard LC9/LC9S holster won’t work. Just like the Centerfire laser, a Ruger LC9 or LC9S equipped with the Crimson Trace LaserGuard also requires a holster specifically made to fit it. The MTR Custom line of holsters also features a series of custom made leather holsters that will fit this weapon/laser combo, and they can be viewed here.

The Ruger LC9S Pro is just a deluxe version of the standard LC9S so any holster made for the LC9S will also fit the LC9S Pro series.

Any holster listed below is available in a version to fit the Ruger LC9, LC9S, or LC9S Pro.