The Smith and Wesson (S&W) J frame series of revolvers is the most popular series of 5-shot small frame wheelguns ever produced and a favorite for concealed carry. However, among all the different J frame models on the market today, the S&W 642 remains a top seller. 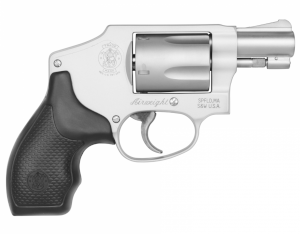 As far as snub-nosed revolvers go, the 642 is built for concealed carry. Its stubby 1.875-inch barrel and double-action-only functionality make it ideal for pocket carry or any type of concealment.

Many people commonly believe that the 642 is a “hammerless” revolver, but that’s a misnomer. The 642 is equipped with an internal hammer within the frame. However, the hammer is not accessible to the shooter, making this revolver operate in double action all the time.

Currently, the Model 642 is offered in a few different configurations:

The 642 is only available in .38 Special caliber with a five-shot capacity.

This revolver model is highly versatile and small enough to carry in many different holster styles, including:

Let’s look a little closer at each holster style:

Inside the waistband carry is the most popular method that we see for the 642. While the cylinder size makes the revolver slightly wider than a micro-sized single-stack semi-automatic pistol, the short barrel and light weight make these revolvers ideal for an inside the waistband holster. 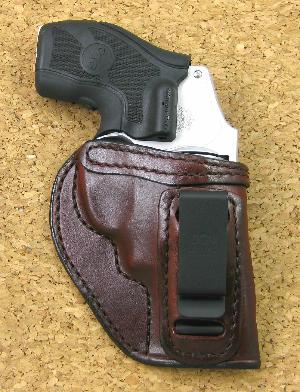 Our top-selling Smith and Wesson 642 IWB holster options are:

The compact size of the J frame revolver models makes them easy to carry in a belt holster or outside the waistband holster. In addition, the sub-2 inch barrel means that the holster can ride high on the belt and still ensure a full firing grip during the draw.

Our most popular belt holster models for the 642 are:

Pocket carry is an area where the 642 really shines and has quickly become one of the most popular methods for carrying this revolver model. Not having an exposed hammer means less chance of a potentially snag-free draw from the pocket. While the 642 may be too large for some small pockets (like those found on tight jeans), it works well in cargo pants, khaki pockets, and shorts. It also works well for pocket carry in jackets and coats.

Our top-selling smith and Wesson 642 pocket holster options are these models:

The 642 makes an ideal backup gun or main CCW gun carried on the ankle. First popularized by law enforcement officers, the ankle holster has become a more popular approach for concealed carry in the right conditions.

Something to keep in mind with the 642 and ankle carry, since the 642 doesn’t have an exposed hammer, the retention strap or thumb break found on most ankle holster models fits over the back of the revolver where the grip meets the frame.

Here are our top-selling S&W 642 ankle holster models are these models:

Here are some of the more common frequently asked questions that we see regarding S and W 642 holsters:

I have a 642 with Crimson Trace lasergrips, but the holsters made for a non-lasered 642 don’t seem to fit right. Do you have any holsters to fit a 642 with laser grips?

Depending on the holster style and maker, laser grips can make finding a holster challenging. “Most” holsters built for the non-lasered 642 won’t fit a laser-grip model all that well, as the position of the laser grips can interfere with the holster fit.

Luckily, any MTR Custom holster models shown below are available in versions specifically made to fit a S&W 642 with Crimson Trace laser grips.

All the 642 models (except for the versions with laser grips), including the Airweight, have the exact dimensions and fit the same holster fit.

Any of the holsters listed below are made in a version to fit a S&W 642 revolver.