Introduced in 2012, the Smith and Wesson SD40VE is the .40 caliber version of the S&W SD9VE. S&W introduced the 9mm version in early 2012, and the .40 caliber SD40 VE version was released in the spring of 2012. Both models are budget-friendly handgun options designed for home defense, range use, or personal protection. 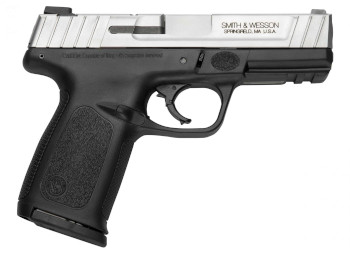 Click this link or scroll down to see all the S&W SD40VE holster options that we carry.

Like the SD9VE, the 40VE has a history with the older S&W SD pistol series and the S&W Sigma 40 pistol family. Over the years, Smith and Wesson have slightly changed the pistol name a bit. When first introduced, it was called the SD40VE, while the current models are listed as SD40 VE with a space between the SD40 and the VE. Don't let that confuse you, as they are both the same pistol model.

Since all the SD VE pistol models are striker-fired pistols, the SD VE pistol series was marketed as being a less costly 9mm and .40 caliber alternative to the popular Glock series of handguns.

When the SDVE series of handguns was introduced, the .40 caliber S&W round was at its peak of popularity, so, at that time, S&W sold equal amounts of the 9mm and .40 caliber versions. Today, the 9mm SD9VE model is a more popular seller than the .40 caliber model.

Also, like the SD9VE model. The SD40 VE handgun is available in two versions:

The SW SD40 VE is a clone of the 9mm model and features the same operational controls. In addition to the difference in caliber, the only other area where the .40 caliber version differs from the SD9VE is the magazine capacity. The 14 round SD40VE magazine in .40 caliber holds two fewer rounds compared to the 16 round SD9VE magazine.

The lightweight polymer frame mated to the more powerful .40 caliber round means that the SD40Ve offers more felt recoil than the less potent 9mm version.

In terms of holster options for the SD40 VE pistol, the two model popular holster styles are IWB and OWB holsters.

Our most popular IWB holster options for the 40ve are the MTR Custom Adversary IWB and the MTR Custom Slimline Tuckable IWB. These two holster models can be seen below.

With IWB holsters, the most popular features are:

Body shield - This is a term used to describe the leather barrier built between the pistol and the shooter's body. This barrier acts to protect the body from the sharp edges of the handgun.

Attachment Method – This refers to the way or style that the holster attaches to the belt when carried inside the waist. The most popular type is a metal clip or plastic clip (we prefer metal for durability), although some holster makers also use leather snap-on straps.

Any of the inside the waistband holster models displayed below are manufactured in a version to fit the SW SD40VE.

An OWB holster is a holster style worn on the belt, outside the waistline. This holster style mounts to the belt using either belt slots, belt loops, or snap-on straps.

Our top-selling OWB holsters (also called belt holsters) for the SD40 VE are the MTR Custom Pancake Slide and the MTR Custom Dual Carry holster (both can be seen below).

Here are some frequently asked questions that we see regarding holster options for the S&W SD40VE pistols:

Will the SW SD40 VE fit in a gun holster made for the SD9VE?

The 40VE and 9VE models are the same sizes, so a 40VE will fit into a gun holster made for the 9VE.

Do you have or make an S&W SD40ve holster with light?

Most all the MTR Custom holster models listed below can be produced to fit the SD40 VE with a light mounted. However, MTR Custom only supports the most popular or mainstream weapon lights from OLight, SureFire, and Streamlight brands.

Can you direct me to your SW SD40VE with laser holster models?

Any of the gun holsters listed below are available in a version to fit the S&W SD40VE with a laser mounted. MTR Custom can support most popular laser brands, including Armalaser, Crimson Trace, Viridian, and LaserMax.

When it comes to weapon lasers, MTR Custom can also support holsters for the 40VE with a laser mounted. They can do holsters for laser brands like Armalaser, Crimson Trace, LaserMax, Surefire, and Viridian.

Does the Smith & Wesson SD40VE have a safety?

The S&W SD40VE pistols are not equipped with a manual safety option. While they have some safety features built into the design, they do not have a manual safety that be switched off and on.

Any of the gun holster models displayed below are manufactured in a version to fit the S&W SD40VE pistols.