For the longest time, the only mainstream pistol on the market chambered in 5.7x28mm was the FN Five-Seven. That changed in 2019 when Ruger introduced the Ruger-57 at the 2019 SHOT Show. Before we discuss Ruger 57 holster options, let’s dive a little bit deeper into the pistol itself. 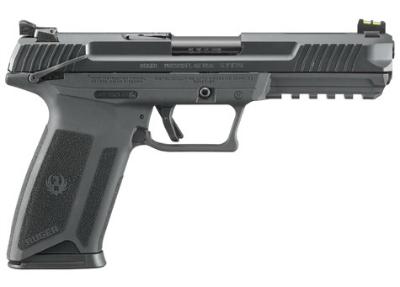 Ruger’s 57 pistol has the appearance of a striker-fired pistol, but that’s not the case. It’s actually a single-action pistol with an internal hammer. The pistol features an ambidextrous 1911-style thumb safety that operates in the same manner as a 1911 thumb safety: up for Safe and down for Fire.

The standard 57 ships with two 20 round magazines, and Ruger has also introduced a state-compliant version that ships with two 10 round magazines for states with capacity restrictions. This handgun is also optic-ready with a removable optic plate and adapter plates made for Burris and Vortex red dots. Ruger has indicated that adapter plates for other red dot brands will be available soon.

Since the only other 5.7 pistol on the market is the FN Five-Seven, comparisons between the two are inevitable. So, how are those two pistols different?

Let’s talk holsters for the Ruger-57:

Let’s be clear, with an overall length of 8.65”, the 57 is a large handgun. The pictures online don’t do it justice, as I was surprised at the size of the first one I saw in person. For most shooters, the larger size will play a role in the types and styles of gun holsters for this pistol, especially for concealed carry.

Given its size, OWB holster (outside the waistband) models and belt holsters are the most popular holster styles that we see for this handgun. Our best selling OWB holsters for the R57 are:

For those interested in carrying the Ruger-57 inside the waistband, our top selling IWB holster has been this model that can be worn IWB or OWB: MTR Custom Dual Carry Holster.

Under most circumstances, trying to find a holster for any pistol with a red dot or RMR optic mounted is a challenge, and this pistol is no exception. However, we can help with that because MTR Custom offers holsters made for a Ruger-57 with a red dot optic mounted. They do this by providing an “RMR cutaway” option, which is a slot cut into the holster where the red dot rides as the pistol is holstered.

Here are some of the more commonly asked questions that we’ve seen regarding holsters for the Ruger-57 handgun:

Will a Ruger 57 fit into a holster made for the FN Five-Seven?

I have a Ruger 57 pistol with an aftermarket threaded barrel. Can you make a holster to fit it?

Any of the MTR Custom holsters listed below can be built to accommodate a threaded barrel on the 57 pistol. You would just need to select the “Add threaded barrel” option during the holster ordering process.

Do you have any kydex holsters for a Ruger-57?

Unfortunately, we do not currently offer any kydex holster model for the 57. We only carry leather holster options at this time.

Where can I find a holster for my Ruger-57 with a Streamlight TLR-1 mounted?

Any of the MTR Custom holsters listed below can be built to fit a 57 with most any mainstream weapon light mounted, including a Streamlight TLR-1. You would just need to choose the appropriate light from the “lights and lasers” drop-down menu during the ordering process.

Other weapon lights that are supported for the 57 are:

Can you carry a Ruger 57 in an IWB holster?

Although the Ruger 57 is not an ideal pistol for concealed carry, it is possible to carry one in an IWB holster, especially if you have a larger frame. Successfully concealing it will be challenging for a smaller framed person.

Do you have any holsters that will fit a Ruger-57 with a Viridian E-series laser mounted?

The MTR Custom holsters displayed below can be built to fit a 57 with the Viridian E-Series 57 laser mounted.

I’m having real trouble finding a magazine carrier that properly fits the Ruger-57 20 round magazines. Can you help?

Any of the MTR Custom magazine carriers (both the single carriers and double carriers) are available in a version specifically made to fit the 20 round Ruger-57 magazines.

Where are your Ruger 57 concealed carry holsters?

Most any gun holster listed below could be used as a concealed carry model for the Ruger-57. We've already mentioned a few of our top selling models for the 57 above.

Any of the holster models shown below are available in a version to fit the Ruger-57 pistol.