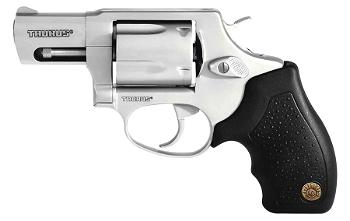 Like the Model 85, the Taurus 605 is also a five-shot revolver that comes in models with a full hammer and models with a bobbed hammer. The models equipped with a full hammer operate as double action and single action, while the bobber hammer models are double action only. The bobbed hammer models were specifically designed for concealed carry as the hammerless design was less prone to snag on something during the draw.

Like many Taurus revolver models, the Model 605’s are equipped with an internal lock to lock the action safely with a key. In addition to the internal lock, the 605 comes with a transfer bar safety that protects the firing pin from being hit unless the trigger is pulled.

Note – In 2011, Taurus introduced another variant of the Model 605 called the 605 Poly Protector. This version is substantially different from the standard Model 605 as it features a polymer-based frame and a slightly different barrel configuration.

With its 2” barrel and the ability to shoot .357 or .38 Special ammo, the 605 is a popular option for concealed carry and general self-defense. Because of its popularity, several different holster styles on the market work well for the 605.

Our top-selling inside the waistband holsters for the 605 are these models: (Which can all be seen below)

Our best-selling front pocket holsters for the 605 are these:

If IWB or pocket carry are not viable, another potential holster style is an OWB holster. OWB is a commonly used acronym for “Outside the Waistband,” and it simply means that the holster is attached to the belt and rides on the outside of the waist.

Outside the waistband holsters are also frequently called belt holsters as well. This holster style usually mounts to the belt using belt slots but can also use leather snaps for mounting.

Here are our top-selling OWB holsters for the Model 605:

Another potential holster option for the Taurus M605 is an ankle holster. This style of holster attaches to the ankle using a strap and is concealed by the pants leg.

Ankle holsters generally use an integrated thumb break or security strap to ensure that the revolver stays in the holster until needed. However, since the security strap uses the hammer on the 605 to help secure the revolver, the ankle holster may not be the best option for a Taurus 605 with a bobbed hammer.

Our most popular ankle holster for the 605 is this model:

Here are some of the frequently asked questions that we see regarding holster options for the Taurus 605 revolver:

What’s the best concealed carry holster for a Taurus 605?

That’s a tricky question to answer because it’s based on opinions and experiences. Also, there are many variables associated with trying to answer that question. For example, variables such as climate, body type, and typical attire play a significant role in holster selection.

However, we find that IWB holsters for the 605 are the top-selling models in terms of popularity. Our single best-selling holster for the 605 is the MTR Custom Adversary IWB holster.

Will a Taurus 605 Protector Poly fit in a holster made for the metal Taurus 605?

Unfortunately, it won’t, as the Taurus 856 has a slightly wider cylinder compared to the Model 605, so the 605 ends up fitting loose in an 856 holster.

Does the stainless steel Taurus 605 fit in the same holster as the blued 605?

The stainless and blued Model 605 are the same size and fit a holster made for the 605.

All the holster models shown below are available in a version to fit the Taurus Model 605 2”.