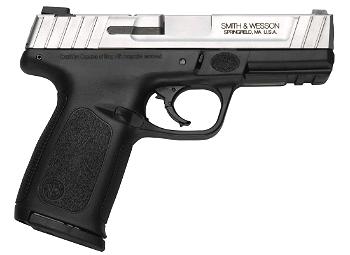 The 9VE version is a striker-fired pistol design, so it does not have an external hammer. The SDVE models are offered in two calibers:

The SD9VE is available in two configurations:

With its budget-minded price point, the SD9VE has been an excellent seller for S&W, especially in the home defense and self-defense markets.

There are several popular holster styles for the SW SD9VE, including belt holsters, IWB holsters, and paddle holsters. Let’s look at each type in a little more depth:

IWB Holsters for the SD9 VE

From a size standpoint, S&W classifies the SD9VE as a compact pistol, even though it has an overall length of 7.2 inches. However, with an unloaded weight of 22.4 ounces, the 9VE is relatively lightweight for its size.

For concealed carry, the SD9 VE can be carried with an inside the waistband holster (IWB holster), and our top-selling IWB models for the 9VE are these:

Belt Holsters for the SD9VE

Belt holsters go by several different names, including outside the waistband, OWB, and pancake holsters. This holster style mounts to the belt using belt slots in the holster.

Our top-selling OWB holsters for the SD9VE are these:

Paddle Holsters for the SD9VE

Another popular holster option for the 9VE is a paddle holster. This holster style uses a paddle attachment to mount to the waist to keep the holster in position. This style is popular due to its ease of putting on and taking off compared to a traditional belt holster.

Our top-selling paddle holster for the SD9 VE is the MTR Custom Paddle Holster.

Here are some commonly asked questions that we see regarding holsters for the S&W SD9VE pistol:

Do you have a holster for a SD9Ve with light?

Most of the holster styles shown below are available in a version to fit the SD9VE with a light mounted. MTR Custom can support the most popular light brands, including SureFire, Streamlight, and Olight.

Is the SD9VE good for concealed carry?

Can you recommend a good sd9ve OWB holster?

We touched on that topic above and provided some links above to our top-selling OWB holsters for the SD9 VE.

Will the SD9VE fit in a holster made for the SD40VE?

The SD9VE and SD40VE are built on the same frame and have the exact dimensions. As such, an SD9VE will fit into a holster made for an SD40 VE. If you’re shopping for a holster for your SD40VE, those can be seen here: S&W SD40VE holsters.

Do you have an SD9 VE with laser holster?

Most any MTR Custom holster listed below is available in a version to fit the SD9VE with a laser mounted. MTR can support most mainstream laser models, such as Armalaser, Crimson Trace, LaserMax, and Viridian.

Each of the holster models listed below are available in a version to fit the Smith & Wesson SD9VE pistol.