Introduced by Taurus at the beginning of 2019, in 2019, the Taurus TX22 was designed as a full-size semi-automatic 22 pistol to meet many needs, including: 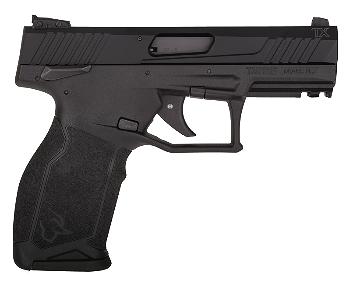 These models laid the foundation for a polymer framed .22 semi automatic pistol that could do well in today's market.

Built on a polymer frame, the TX22 is a single-action-only, striker-fired handgun available with or without a manual safety option. Weighing just under 18 ounces, the TX22 is light enough for new shooters and younger shooters to manage, yet heavy enough to feel like a full-size handgun for more experienced shooters.

Since the TX22 has the operational controls that are typically found on centerfire pistols, it’s an ideal training platform for beginners and smaller framed shooters.

The TX22 has had excellent reviews and was named the Guns & Ammo's 2019 Handgun of the Year.

Holsters for the Taurus TX22

Given the target market of the TX22, there may not be as many holster options as commonly found with a designated concealed carry pistol like the Glock 43 or Sig P365.

While we offer IWB holsters and concealed carry holster styles for the TX22, our top-selling holster models have been outside the waistband (also called OWB holsters) and paddle holster options.

Our top-selling OWB holster models for the TX22 are:

All of those holsters can be seen down below.

Here are some commonly asked questions that we’ve seen regarding holster options for the Taurus TX22:

I mounted a laser on my TX22 to help my daughter learn to shoot. Do you have a holster that will fit a TX22 with a laser mounted?

The answer will depend on the specific brand and model of the laser that you purchased. If it’s a mainstream brand and mainstream model, then there’s a very good chance that MTR Custom can support a TX22 with laser holster. Currently, they can support brands like Crimson Trace, Viridian, and Armalaser.

Do you have a Taurus TX22 paddle holster?

Do you have any concealed carry holsters for the Taurus TX22?

Typically, when discussing concealed carry holsters, most people are asking about IWB holsters. Any IWB holster displayed below is available in a version to fit the TX22 22 pistol.

Do you have or offer any magazine carriers for the Taurus TX22 pistol?

Any of the mag carriers listed below are available in a version to fit the Taurus TX22 16 round magazines.

Do you offer any thing to fit a TX22 with a Viridian laser mounted?

Any of the gun holsters listed below are available in a configuration to fit a TX22 with a Viridian E series laser mounted. During the ordering process, you would need to choose the "Viridian E-Series Taurus TX22" option from the "Lights & Lasers" drop-down menu.

Where can I find a holster for the Taurus TX22 Competition pistol?

Unfortunately, we do not offer holsters for the TX22 Competition model yet but will update this page as soon as it becomes available.

Any of the leather gun holster models listed below are made in a version to fit the Taurus TX22 pistol, and all of these holster models are available in a right hand and left hand configuration.