In 1976, an H&K design pistol was submitted as part of a pistol trial for West Germany as they were choosing a new, high performance 9mm pistol. Although the design didn’t have a formal name yet, it would eventually be produced in 1979 as the H&K P7 pistol. While the P7 was considered a very successful pistol internationally, it really didn’t catch on the US. It was believed that the following 2 issues adversely impacted adoption in the US:

#1 – The P7 featured a typical European magazine style release located on the heel of the pistol. This magazine release is much different from the more popular US based magazine releases found near the top of the trigger guard by the grip.

#2 – The design of the P7 led to complaints of the frame heating up during rapid firing. This was encountered in P7 models in Europe and in the US. 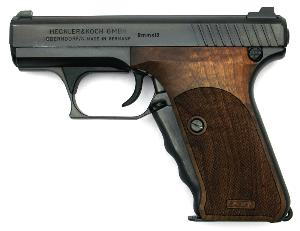 While the some features of the P7 were embraced by the US market, it became apparent to H&K that these issues had to be addressed in order for the US market to adopt the P7. So, in 1981, H&K introduced a modified version of the P7, called the P7M8. The M8 model featured a US friendly magazine release located on in the traditional US location on both sides of the frame. This model also utilized a heat shield in the frame designed to address the overheating issue.

The newer P7M8 model offered the exact same functionality of the P7, including the same 8 round magazine, squeeze cocker operation, and fixed barrel. The 8 round magazine was on the low side for US based LEO adoption, so the M8 didn’t do well there. However, it proved to a very successful move for H&K in the US as this model developed a distinctive following in the US. When the P7M8 was discontinued in 2008, the pistol came into its own for collectors and fans alike.

Here are some of the more commonly asked questions regarding holsters for the P7M8:

Unfortunately, due to the changes on the frame involving the magazine release relocation, the M8 version won’t fit in a holster made for the P7.

#3 – I’ve read in some places that the design of the P7M8 (most specifically the squeeze cocker integration), makes this pistol grip heavy and therefore, it requires a special holster? Is this true?

If you are comparing the grip weight of the P7M8 to another single stack weapon, it probably is a little more grip heavy than most. However, if you are comparing the P7M8 against most other double stack magazine pistols, the grip weight is average. That being said, there are some holster makers that do offer specialized holster models designed specifically for the P7M8. To be honest, we our experience has been that most standard holsters work just fine for this pistol.

Our most popular selling holsters for that model are these:

All the holster models listed below are made to fit the H&K P7M8.